The Mighty Downfall of FTX

My name is Ashley Stanhope. I’m the director of communications for Ether Capital and author of this newsletter.

I’m also a former journalist who has been working full-time in the crypto industry for a little over a year now. At times, I feel like I’m back in the thick of the newsroom just waiting for the next big story to break. It never ceases to amaze me how quickly things can take off or fall apart in this space. It’s wildly unpredictable, but all too familiar at the same time. Almost as if history is repeating itself, but instead of powerful business executives making poor financial decisions, crypto billionaires are taking down empires on social media. Proof that no company is too big to fail.

Here’s what happened over the past week and a half that caused FTX, what was once the world’s second largest cryptocurrency exchange, to buckle.

Please note: This story is rapidly evolving so the contents of this newsletter are likely to become dated. In addition, when we refer to FTX in this article, we are referring to the global exchange FTX, not the American exchange FTX.US that (as far as we know) has not been impacted.

It Started With A Scoop 👀 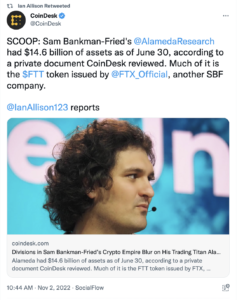 On November 2, CoinDesk reported that according to a private document, FTT makes up a startling 40% of trading firm Alameda Research’s US$14.7 billion asset base.

FTT is the native token of FTX that gives holders perks like discounts on trading fees and extra commission for referrals. The FTT that was on Alameda’s balance sheet was worth roughly US$5.8 billion at the time of writing, nearly double the market capitalization of the FTT token. A portion (US$2.16 billion) was labelled as collateral. Naturally, this raised concerns Alameda borrowed against FTT and possibly the exchange itself.

Alameda’s CEO Caroline Ellison took to Twitter to challenge the report saying FTT represents only part of the trading firm’s balance sheet. However, rumours started to fly that global exchange FTX was insolvent sending investors running for the hills.

It’s important to note that both Alameda and FTX were founded and largely owned by Sam Bankman-Fried, who up until this week viewed one of the most powerful and wealthiest players in the space. 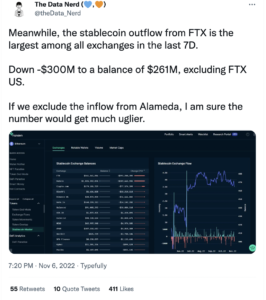 Stablecoin reserves tanked on FTX over a 24-hour period and outflows were the highest among exchanges over a seven day stretch, according to The Data Nerd who tweeted a screen grab from Nansen. By midweek, FTX was down and out US$300 million with its balance sitting at US$261 million.

Blood In The Water 🦈 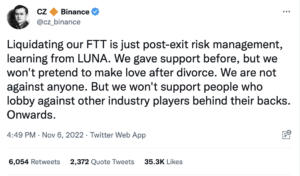 On November 6, Changpeng (CZ) Zhao, CEO of rival exchange Binance, tweeted that he planned to sell his FTT holdings citing “recent revelations.” He went on to call the move post-exit risk management and lessons learned from LUNA. But clearly it was more than just recent revelations, this was personal.

Ellison then responded via Twitter that she would buy all of Binance’s FTT holdings for US$22 each. At the time of the tweet, FTT was trading somewhere between US$23 and US$25, so we’re not sure if she was poking the bear or trying to shock absorb what was yet to come.

FTX ended up halting customer withdrawals after it was overwhelmed by ~US$5 billion worth of withdrawal requests on Sunday. Reports also emerged that SBF asked investors for US$8 billion in emergency funding to cover the “liquidity crunch” caused by recent user withdrawals. He was apparently seeking to raise up to US$4 billion from investors, and cover the remaining sum with debt financing and his own personal fortune to reimburse customers.

November 8: The idea that Binance would sell its entire stash of FTT — worth about US$500 million — triggered a run-on-the-bank scenario. The token precipitously dropped 80% from US$19.33 to US$3.59 on Tuesday wiping out more than US$2 billion in value over fears FTX was facing a liquidity crisis.

In a surprising (but not-so surprising, it’s crypto) turn of events, CZ announced on Twitter that his exchange would be acquiring FTX.com and help cover the liquidity crunch. He claims FTX has asked for Binance’s help and both parties signed a Letter of Intent (LOI) regarding the pending acquisition… 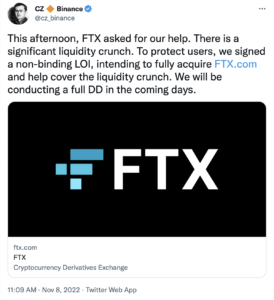 SBF also confirmed the news. There was hope at last! 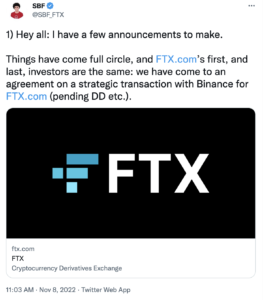 On November 8, a few hours after announcing the deal with Binance, SBF deleted his accusatory tweet thread that also claimed FTX and its assets were “fine.” The following day, rumours began to circulate that Binance is looking to back out of the agreement and FTX’s legal and compliance staff quit.

Binance eventually confirmed it walked away from the deal, which left the beleaguered FTX with few options. SBF who was once handing out lifelines to several faltering crypto companies is now facing mounting pressure from investors and the United States Securities and Exchange Commission for allegedly mishandling customer funds.

“As a result of corporate due diligence, as well as the latest news reports regarding mishandled customer funds and alleged U.S. agency investigations, we have decided that we will not pursue the potential acquisition of FTX.com,” Binance confirmed in a statement to Reuters on Wednesday.

To make matters worse, The Wall Street Journal reported that SBF told an investor Alameda owes FTX roughly US$10 billion. The exchange apparently extended loans to Alameda using money that customers had deposited for trading purposes, a decision that SBF described as a “poor judgment call,” according to a person familiar with the matter. In total, FTX had US$16 billion in customer assets and shelled out more than half of that amount to Alameda.

By this point, we hadn’t heard from SBF in a couple days — the silence was deafening. That was until Thursday morning when he gave the apology of the century: 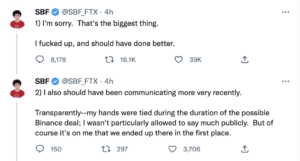 The curtain finally fell for FTX on November 11 when the company confirmed it will be filing for Chapter 11 bankruptcy protection and Sam Bankman-Fried resigned from his role as Chief Executive Officer. A sad ending to what was one of the world’s most successful and reputable crypto companies valued at US$32 billion earlier this year.

The collapse of FTX could be felt across the industry and the pullback will likely continue in the coming days and weeks.

Bitcoin and Ethereum are regaining strength after being rocked by the news. They are still down 18% and 23% respectively over the past seven days.

In addition to FTT getting nuked, other cryptocurrencies like SOL, the native token of Solana, took a massive hit. SBF was an early investor in Solana via Alameda. SOL shed nearly 50% of its value over the past week hitting a yearly low of US$12.93. 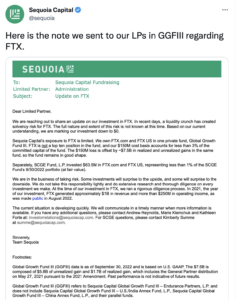 This is a story that will undoubtedly haunt the industry’s credibility for some time. It’s possible many institutions that were once considering allocating capital will hold off until they have a better picture of how their funds are being managed.

Many of us considered FTX a well-oiled machine and its fearless leader as the “White Knight” of crypto who made strides with Washington policymakers. Now we can expect regulators to step-up enforcement, especially after witnessing the carnage that unfolded as a result of UST/LUNA’s collapse earlier this year. However, as we explained to CBC, they could end up painting all of crypto with the same brush and handcuff the industry.

This was a painful lesson for investors, one that we hope doesn’t get repeated. What’s important to note is that the industry will regain strength and improve over time. People will educate themselves about innovation like self-hosted wallets and cold storage. Exchanges will adopt a proof-of-reserves mentality and be more transparent with their assets. In fact, customers will come to expect it.

FTX’s demise is another example of centralized players operating in crypto who led investors astray. There’s a reason why many DeFi lending protocols remain unscathed. It’s because all of the inner workings are transparent so it’s easy to peer around corners and spot dangers before they happen. That way, the writing is on the wall (or on chain) and we can avoid colossal failures that spread contagion like wildfire. 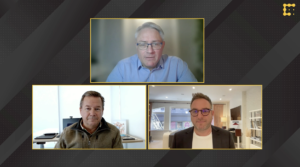 ICYMI we participated in a CoinDesk webinar earlier this week with Hal Lonas, CTO of Trulioo, about what it takes to drive the next wave of crypto adoption.

Both Lonas and Ether Capital CEO Brian Mosoff reacted to the fallout from FTX and discussed the challenges when it comes to regulation in DeFi. Go here to check out the full webinar on our YouTube page! 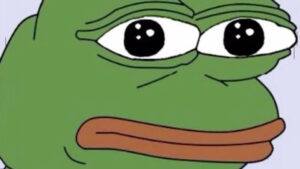 Don’t worry, we want to help!

While we can’t provide specific investment advice, we do want to steer you in the right direction to stay informed. Please reach out to us and we’ll do our best to answer your questions.

This newsletter is geared towards traditional investors who are interested in the space. If you have suggestions on how we can improve our content or make it better, please let us know — we love feedback! Thanks for subscribing.