Living in a Post-Merge World

The Merge Happened, Now What?

One of the biggest technical achievements in crypto took place two weeks ago, and now that the dust has settled, we have a better idea of how things are shaping up in the ecosystem. 🔎

Ethereum miners have unplugged an estimated US$5 billion in hardware and more than 80% have gone offline since the switch to Proof of Stake, according to a website that tracks the hash rate of Proof-of-Work networks.

Ether is also down roughly 8% since September 15. 📈 While the pullback could be attributed to many things, including recent comments by the U.S. SEC sizing up the protocol post-Merge, its anyone’s best guess as to what directly influences the crypto market.

We can almost guarantee that Ethereum pulling the plug 🔌 on mining won’t lead to mass adoption overnight. However, it does set the stage for future implementations aimed to reduce transaction costs, network congestion and speed up processing times. 💡 🚀

At its core, this was an infrastructure upgrade through and through that’s meant to have a long-term impact, not a short-term one.

The TLDR on ETH Supply ⬇️

An important thing to note is that both a reduction in network issuance (newly created ether) combined with burning of ether (destroying a portion of existing supply) that was implemented in last year’s London upgrade, will contribute to less circulating supply.

Not being able to withdrawal staked ETH at the moment might deter some investors who don’t feel comfortable locking up 32 ETH for an indefinite period of time. 🤔

Here is what you can expect to within the next six to 12 months when it comes to staking withdrawals:

Once validator withdrawals are enabled as a result of the Shanghai upgrade, those who stake will be incentivized to remove their earnings/rewards as these funds are not contributing to their stake weight (max of 32 ETH).  🥩

Stakers might also choose to exit and withdraw their entire validator balance, but to ensure Ethereum remains stable and prevent a run on bank scenario, the number of validators leaving simultaneously is capped. Only six validators will be able to exit within a 6.4 minute period depending on the total amount of ETH staked at the time. This is expected to decrease to as low as four as more validators withdraw to intentionally prevent large destabilizing amounts of staked ETH from leaving at once, according to Ethereum Foundation.

Now that there’s a better sense of circulating supply of ether, it only increases the blockchain’s value proposition. For several years, Bitcoin made a name for itself as the digital gold, implying scarcity as there will only ever be 21 million bitcoin (BTC) in existence. This rule, encoded in Bitcoin’s source code, cannot be changed unless there is network consensus. 🤝  It’s likely that both institutional and retail investors will start to pay closer attention to the world’s second largest cryptocurrency that offers utility, an eco-friendly alternative to BTC and incentivizes token holders by allowing them to capture a yield (currently more than 5%). 🥇

Mid-Year Update: Ether Capital has staked more than 20,500 ETH as at June 30, 2022, and generated $1.4 million in staking rewards for the first half of the year. Go here to access our Q2 earnings report.

ETHC Op-Ed on the Merge ✍️ 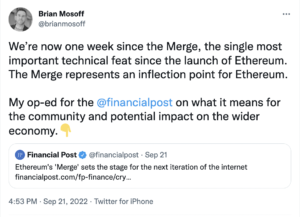 ICYMI we wrote an essay for the Financial Post about Ethereum’s big transition to Proof of Stake and what it means for the global economy, including Canadian businesses. Make sure you check it out and let us know what you think! 🇨🇦 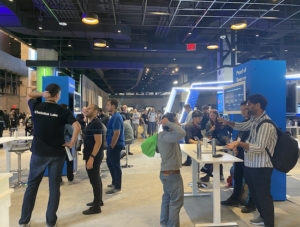 Chainlink might be the unsung hero of the crypto world. The decentralized oracle network provides a critical service to multiple Layer-1 and Layer-2 protocols by allowing their smart contracts to access real-world data. 💡 💻

The keynote on day one was a fireside chat about the future of Web3 with Eric Schmidt, former CEO of Google and advisor to Chainlink, and Sergey Nazarov, co-founder of Chainlink Labs. 🎙️

Schmidt, a self-proclaimed skeptic, says although the marketing around Web3 “got a little ahead of reality,” it appears the industry is “getting its act together” following Ethereum’s historic transition to PoS. Here are a few takeaways from the discussion 👇

The Web2 mogul says the idea of trustless, immutable and distributed networks is really powerful for computer systems overall. However, using tokens to incentivize behaviour on Layer-2s is a novel concept that changes economics in fundamental ways.

“The fact that [a] token goes up in value based on network effects is a real discovery,” he said. “This is a new way of tying compensation and incentives to network scale, and it’s a big deal.”

Schmidt believes in order to win over the masses, crypto needs to do a better job when it comes to speed and functionality. Put simply, the current infrastructure is not built to scale.

“As excited as you are about the complexity of your product, the consumer actually just wants it to work, ” he said. “You have to get the architecture right so you can go from 10 users to 10 million.”

Despite gargantuan Web2 companies like Microsoft, Amazon and Google surpassing Web3 in terms of scaling techniques, Schmidt commended progress being made on new and emerging scaling solutions, like zero-knowledge rollups.

Having lived through the Apple vs. Android battle in the mid-2000s, he says he sees a future where Web2 hardware will act as a gateway for users to tap into Web3 services. “These are fights that define a generation of technology,” he said. “It comes down to hardware and technology of choice.”

When it comes to new policies and frameworks, Schmidt encourages the industry not to advocate for premature regulation.

“You want these systems to get built so people can understand what the really hard problems are, and then you want to figure out what problems they cause,” he said.

Acknowledging society doesn’t necessarily reward those with libertarian views, he explained that governments will asset their authority, but it’s important it’s done in a way that’s rational. “My overall message for those working with regulators is to take it slow and get it right,” he said.

We agree with this sentiment and considering the asset class is so unique and constantly evolving, it requires a thoughtful and collaborative approach by those in the industry and policymakers when it comes to new guidelines. 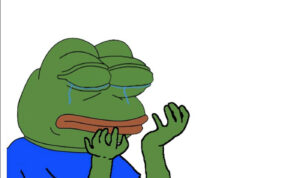 While we can’t provide specific investment advice, we do want to steer you in the right direction to stay informed. Please email us and we’ll do our best to answer your questions.

This newsletter is geared towards traditional investors who are interested in the space. If you have suggestions on how we can improve our content or make it better, please let us know — we love feedback. Thanks for subscribing.